Jon Stewart defended The Dave Chappelle controversy Saturday Night Live monologue, where the comedian was accused of “normalizing and popularizing” anti-Semitism by the Anti-Defamation League, during an appearance in The Late Show.

Stewart has been friends with Chappelle for more than two decades, at least since they appeared together in the 1998 sitcom. Half cooked. The two have also performed shows together in recent years.

“Everybody calls me, ‘You see Dave SNL?’ And I say yes, we are very good friends. I always see and send nice texts,” Stewart told host Stephen Colbert. “‘He normalized anti-Semitism with the monologue.’ And I say, I don’t know if you’ve been in the comment sections on most news articles, but it’s pretty normal. Anti-Semitism, it’s incredibly normal. But the only thing I’m going to say is that I don’t think censorship and penalties are the way to end anti-Semitism or to get no understanding. I don’t believe that. It’s the wrong way to go about it.”

After the 15-minute monologue, ADL CEO Jonathan Greenblatt tweeted about Chappelle’s routine: “We shouldn’t expect @DaveCappelle to serve as society’s moral compass, but it’s disturbing to see @nbcsnl not only normalizing but popularizing o #antisemitism. Why are Jewish sensibilities denied or diminished almost everywhere? Why does our trauma elicit applause?”

Also Read :  Why is NYC's arts community still punishing kids by forcing them to mask? 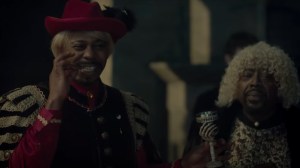 However, Stewart defended both what Chappelle said, and his right to say it, and stressed the importance of having these conversations out in the open.

“Dave said something in the SNL monologue that I found constructive, which says: ‘It shouldn’t be so difficult to talk about things’. They call me anti-Semitic because I am against Israel’s treatment of Palestinians. I get called other things by other people based on other opinions I have, but those close the debate,” Stewart said.

“Whether it’s comedy or discussion or anything else, if we don’t have the means to face what reality is, then how are we going to move forward? If we all shut it down, we retreat to our little corners of misinformation and it metastasizes. The point of all this is to not let it metastasize and get it out in the air and talk about it.”

The conversation then turned to Kyrie Irving and Kanye West, two more high-profile people in hot water for anti-Semitism. “The Kanye thing, he can be erratic, and he says things that didn’t surprise me. The Kyrie thing surprised me, you don’t expect to get that from someone named Irving,” Stewart joked. “I really thought he was one of our own.”

“Kyrie Irving, he’s suspended from basketball. If you want to punish this man, send him to the Knicks,” Stewart added. “Punishing someone for having a thought, I don’t think that’s the way to change their mind or get understanding. This is a grown man. The idea of ​​you saying, ‘We’re going to put you in a timeout. You have to sit in the corner and stare at the wall until you no longer believe that the Jews control the international banking system.”

“Comedy is reductive. We play with tropes, because everyone has biases in their lives and the way they see things,” Stewart said, returning to the monologue. “And comics rely on those biases as shorthand for our material. Even the most woke of comics plays with tropes to some degree.”

Stewart added: “But the most interesting thing that comes out of this, in my mind, is something that Kanye said on his tour that he was doing: he was interviewed by five different people because the media model is fire and conflict, he said, “People wound hurts people,” and if the point of all this is to heal people, the only way to heal the wound is to open it and clean it, and that itches, and that hurts, but you have to expose it. air. But I’m afraid that the the general tenor of conversation that this country has is ‘Cover it, bury it, put it on the periphery and don’t deal with it.’ And what I would say is, look at it from a black perspective. It’s a culture that feels its wealth has been extracted by different groups —whites, Jews—whether it’s true or not, that’s the feeling in that community, and if you don’t understand where it’s coming from, then you can’t deal with it.”

Can the Trail Blazers Keep Josh Hart and Jerami Grant?